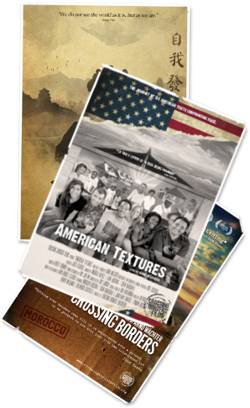 Crossing Borders Films (CBF) is a not for profit educational film production company dedicated to deepening intercultural understanding through its documentary films. It was founded by film director and educator Arnd Wächter.

The current world situation is largely shaped by cross-cultural tensions and our survival depends on intercultural understanding. During this time, there is a critical need for a new generation of individuals and leaders who understand the major challenges of cross-cultural conflicts and who have the capabilities, commitment and grit to address them.

Through our films we help to:-

Our three feature length documentaries focus on the interactions of youth from diverse cultural and social backgrounds in different situations. While each film stands on its own, they are designed to be integrated with cross-cultural trainings, social engagement projects and personal development programmes.

Our films help to initiate powerful cross-cultural dialogues and empower individuals to see the world from different perspectives, and to realize their opportunities and responsibilities for global concerns.

Together with National Geographic Education, CBF has created a set of web based tools with intercultural activities built around the Crossing Borders Trilogy. The tools support the National Geographic's vision to deepen geo-literacy amongst the American public and to raise awareness for the interconnectedness of our planet.

The Center for Conflict Transformation (CCT)

CBF has partnered with CCT for the production of its intercultural materials, conflict mediation trainings and for public events. CCT director Ana Rhodes Castro facilitated the group processes during production of The Dialogue and American Textures.

CBF's second feature documentary The Dialogue was co-produced with MSU. The collaboration was part of MSU's International Studies and Programs and has resulted in a number of intercultural events around The Dialogue.

Arnd was born in communist East Germany and grew up next to the Berlin Wall. After nearly two decades of travelling across the world and living abroad he founded Morocco Exchange, a non-profit organization which runs intercultural programmes in Morocco for American students. Arnd's passion for the transformative power of cross-cultural interactions continued with the founding of Crossing Borders Education and Crossing Borders Films.